Top 6 Important Vaccinations for Your Children in South East Asia

Although some contagious illnesses may be relatively rare in your home country, it may not be the case abroad, and particularly in the tropics. It’s important for the health of your family to check which vaccines you all need to receive as children and adults.

It is wise not to listen - to conspiracy theories around mythical attempts by governments to control the population through vaccinations. Many vaccinations could be considered as a miracle of modern science that have helped to protect our children from serious illnesses and complications resulting from preventable diseases.

The Center for Disease Control in the United States recommends that you have your routine vaccinations up to date.

First things first. Check to see if you have the following vaccines. If not, it might be time to get your family’s vaccines or boosters. Below is the list of the six most important vaccines for you to consider while living in Thailand and a handy chart to match the ages of your family.

The BCG, or Bacille Calmette-Guerin, is used to prevent childhood tuberculous meningitis and miliary disease. Many British over the age of 25 will remember the scary experience of queueing with their fellow petrified classmates for this dreaded needle in high school. Not anymore. Most countries now administer the vaccine to infants and Thailand is no different. Most foreign-born people will have been vaccinated.

HepB protects against hepatitis B (infection of the liver). This virus is transmitted through bodily fluids. It may be acquired through sexual contact, contaminated needles and blood. This is why most states require the HepB vaccination for a child to enter school. It is administered in three shots; the first shot given at the time of birth.

DTaP protects against diphtheria, tetanus, and pertussis (whooping cough). It requires five doses during infancy and childhood. DTaP boosters are then given during adolescence and adulthood.

IPV protects against polio and is given in four doses. According to the World Health Organization of the United Nations, the South-East Asia Region has maintained its polio-free status since 2011.

MMR protects against measles, mumps, and rubella (German measles). MMR is given in two doses. The first dose is recommended for infants between 12 and 15 months. The second dose is usually given between ages 4 and 6 years. However, it can be given as soon as 28 days after the first dose.

Japanese Encephalitis or JE, is common in Asia. JE can cause encephalitis (inflammation of the brain), which can be deadly. JE is not found in areas such as North America, Europe and Australia, and thanks to the JE vaccine, travellers rarely contract the disease. Dr. Gerard Lalande, our in-house doctor, says it is wise for western expatriates to consult a local paediatrician to discuss the rationale of the JE vaccination for their young children. 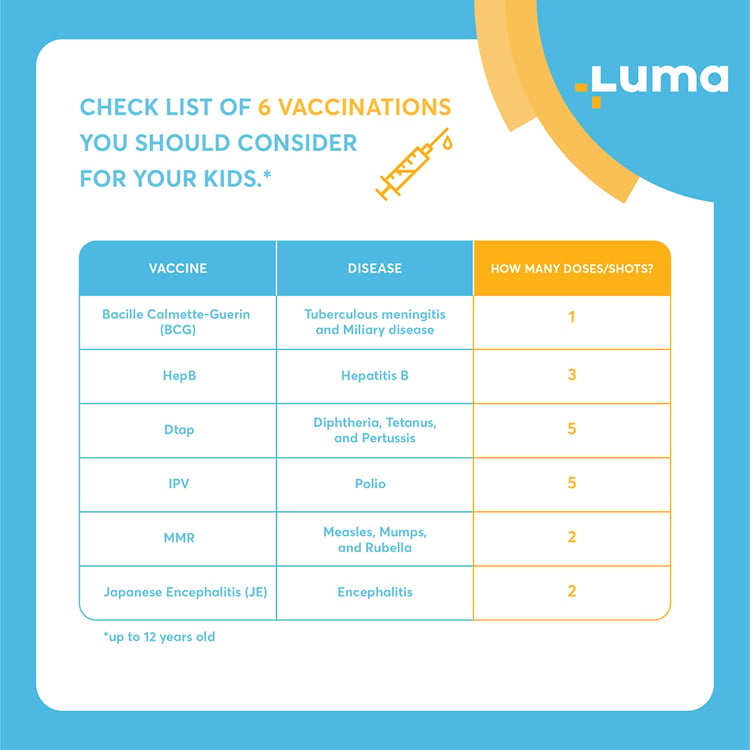 If you're looking for health insurance for your children, our Luma team are happy to help.